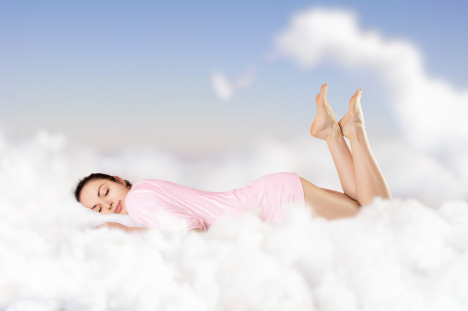 Hubs thought this was going to be our “last” mattress.

Did AGMA say that out loud?

After 3 1/2 years, we each had a huge divot in our respective sides of the mattress.  It was so bad that, if either one of our cats tried to lie in the middle while we were in bed, they would roll into whatever black hole divot sucked them in.

We always found them, but AGMA couldn’t escape the nagging suspicion that they had journeyed to an alternate universe briefly though our mattress wormhole.

My side was approaching National Park status in terms of depth and width.  Okay, realistically maybe only Georgia State Park designation.

The mattress death knell sounded when  I went to an Orthopedist.  After an X-ray of my spine, I found out that it could be used as the letter “C” on a Sesame Street episode.

Perhaps this is why AGMA has been having chronic hip & leg pain after every run since February?

The first thing my great PT suggested was that AGMA change the way I sit in the evening when watching TV and working on my laptop.  Instead of slouching on the couch which is sooooo very comfy,  I was to sit in a straight backed chair with a bolster at my lower back.  This would help put the natural curve back in my back and relieve a bit of the pressure on the spinal discs that have been smooshed by my wonky vertebrae.

But AGMA was a good patient and did as instructed, although I initially pined for my uber-comfy spot on the couch.  Pined AND whined.  But, happily now, 2 months later, I love sitting on my straight backed chair and NEVER sit on the couch anymore.  It’s too uncomfortable.

The second thing my saintly PT suggested was to get a new mattress.

This was not a tough sell to AGMA.  I hated the POS mattress. But I was a bit worried how Hubs would take it.  I mean, this was going to be his “last” mattress right?

Thankfully, he also recognized that our POSM was a POSM.

We talked about trying to get a prorated refund from the POS mattress salesperson, but ultimately decided that the return probably wouldn’t be worth the effort.  AGMA felt confident that he wouldn’t give up without a fight.  And he’d probably want us to buy another mattress from him.

In 2015, I thought there was a seemly unlimited number of mattress choices.

In 2018, there really is an unlimited number of mattress choices.

You can order the foam ones on the internet.  Your mattress is delivered to your door in a box.  You “simply” unroll it, give it some time to “plump up” and put it on your bed.

But who wants to do all that work?  Do you have any clue how heavy a foam king sized mattress is?  And what are we supposed to do with our POSM?

They all come with a trial period so if you totally get the firmness level wrong or you just don’t like it, they send somebody to pick it up and you get a refund (sometimes minus delivery fees – gotcha!)  Then what, since you’ve already gotten rid of your old POS mattress?  And, if you order another one of a different firmness, how do you know you’re going to like that one?

Too many unanswerable questions for AGMA…

So we ended up buying the most expensive air mattress in the world…a Sleep Number bed!  But it was on sale…

No worries about delivery – they deliver it (for $199 that is…) And they cart away your old POSM.  And they have a 20 year guarantee (pro-rated after the first 2 years that is…)

But what sold AGMA was the ability for Hubs and I to adjust the firmness to our individual preferences.  Insane!

So between the dry needling and sitting differently and sleeping on a better, more supportive mattress and doing some exercises, AGMA just might be ready to run that marathon on Sunday.

So if you’re in Chicago on Sunday and want to catch a glimpse of AGMA in the flesh, come down and watch the marathon.

I’ll be the one in the white hat, blue shirt and running shoes.

I know that ya’ll have been wondering what my ‘typical’ day might look like.  “How does AGMA pass the time?” is a question you probably ask yourself on a daily basis.

Let’s use today as an example of a typical, dysfunctional day in my life.

AGMA stayed up way too late gaffawing the night away.  But it was epic!

At 7:20 this morning, our cats, Gux and Max, made it known that they were over this sleeping nonsense, and that I needed to get up chop chop and feed them.  I went back to bed after depositing kibble in their bowls.

I got up again at 8:00 to clean up some food that Max puked up.  On our bedspread.

Hubs and I discovered about 20 minutes later that the REST of the food expelled by Max was in a huge pile on our bed sheet in between our pillows.  Glad I didn’t try to shimmy over to snuggle Hubs.

With the washing machine now swishing in the background, AGMA got ready for the day.  This required I look in the mirror which is always a shocking proposition in the morning.

Washed, brushed, curled and flossed, it was time to take care of some work stuff.

With the package sealed and labeled, now I needed to figure out if I had enough time to go to the USPO before my physical therapy appointment.

My appointment was in 40 minutes.  I still hadn’t had breakfast, the post office is 15 minutes away, then another 25 to my PT appt.

Just enough time if I grab a banana, put in a mobile order at Starbucks for a mocha, and get all green lights.

Unknown…how long of a line there would be at the Post Office.

All green lights?  Not nearly, but there was no line in the USPO and I managed to avoid some accident brouhaha near Starbucks.

My PT specializes in spine issues.  This is good since I recently found out I have a nasty case of scoliosis in my lumbar spine.  Really nasty.

But it explains a lot.  Since February, running has caused me a lot of hip pain and, later at night, radiating pain down my entire right leg.  Really ouchy stuff.  Difficult to get comfortable.  And I was limping like Chester on Gunsmoke (not everybody’s going to get that reference…)

This has been cause for concern.  I’m supposed to run 26.2 miles in early October as a charity runner.  Friends and family have donated over $2100 to the cause.

Exercises over the course of several weeks proved unsuccessful, so last week my PT tried “dry needling”.  Yeah – it’s just like it sounds…

He exposed my cellulite infested right buttock and proceeded to poke needles into my hindquarters.  It’s sort of like acupuncture, but the needles go deeper and into muscle tissue.

THEN he hooked some of the needles up to an electrical current.  He let my rear end pulsate for 15 minutes.  It felt like simmering butt stew.

But it helped immensely.  There are still some sensations down my leg, but no hip pain during my runs.  And my limp is still there, but it’s much reduced.

So AGMA showed up to my PT appointment today and said, “Bring it on!”

Because there’s been a bit of numbness in my right foot the past few days, he put even MORE needles in this week.  And he turned the current up so that, every now and then, one of my lateral rotator muscles in my rear would start to jiggle.  Like jello.  Cellulite jello.

I’d love to have a picture of the whole set-up, but couldn’t figure out how to ask him without him thinking I was a bit of a freak.

Maybe next week I’ll try a selfie.  Of my butt with needles sticking out and little electrodes hooked up to them.

Cats puking on the bed, speeding to the Post Office, shoving a banana down at a stoplight for sustenance, getting electrified needles stuck in my rear, blogging….

Pretty much a typical day for AGMA.