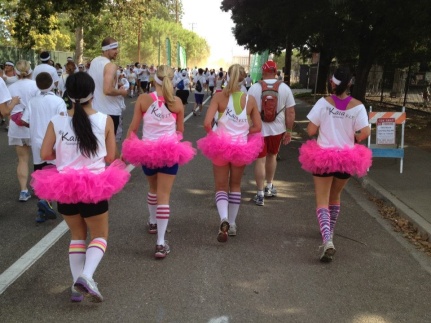 How can you tell if someone ran a marathon?  Don’t worry; they’ll tell you!  (Rimshot)

But now that we’re on the subject and since you’re virtually twisting my arm, I give up. I’ll tell you.  I ran a marathon.  My first.  Last weekend.  A marathon.  26.2 miles.

Holy crap…  What the hell is wrong with me?  Why would a sane 61 year old person do this?

I think the answer is obvious.  I’m just a little bit crazy.

It’s one thing if your running style resembles the hare.  If you’re fast and have a chance to qualify for Boston.  Or have the chance to win your “age group”.  Or want to be the fastest marathoner in your hometown. You know, those people who run 26.2 miles in three hours.  Freaks.

It’s an entirely different matter if your more “mature” and have telltale tortoise tendencies.  You know, the “little engine that could” syndrome…  I think I can, I think I can; I know I can, I know I can.  Slow and steady.  So slow and steady that it takes you almost six and a half hours to run 26.2 miles.  Not that I’m referring to anybody specifically…

But as slow as I was, I did finish.  I’d heard that many people break down when they cross the finish line of their first marathon.   It’s an overwhelming accomplishment. Being half German, I felt as if it would be genetically impossible for me to display emotion like that in public.  Part of that whole German stoic work ethic, you know?  You run 26.2 miles, then wash the car, vacuum the house, paint the garage floor then it’s off to pole dancing class.  No big deal.  Just a normal day.

While I didn’t break down blubbering like Tammy Faye Bakker at a 1985 PTL fundraiser, I did get very verklempt as I crossed the finish.  I was literally fighting back the tears.  I guess my “feeling” brain knew it was a bigger deal than my “thinking” brain wanted to admit.  I guess I was proud of myself.  I’m not used to that feeling.

I’ll tell you…when you’re on your feet for six and a half hours, all sorts of interesting and potentially disturbing thoughts go through your mind.  I discovered all kinds of things about myself and running in general last weekend.  So here’s my brain dump – in no particular order – from my very first “AGMA’s burnin’ off the crazy 26.2 miles”:

I know, seven is a weird number.

Would I do it again?  Oh yeah.