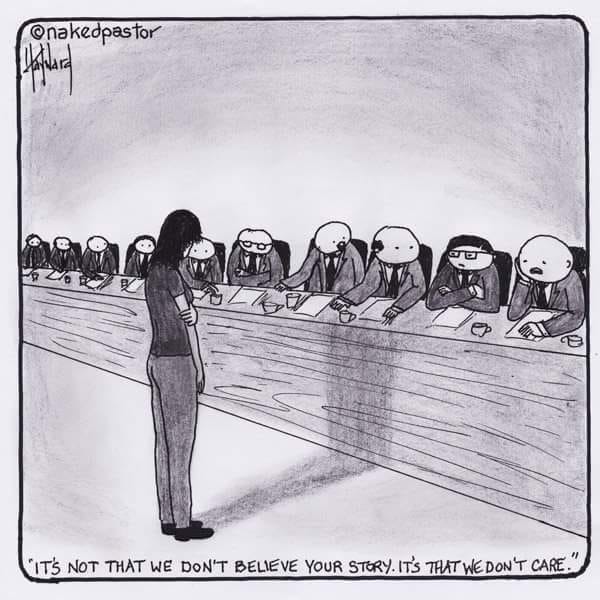 While AGMA has never been sexually assaulted or raped, I grieve along with the tens of thousands of women who have had that horrific, life altering experience.

I grieve that so many of them have felt too terrified to tell their stories and their attackers have gone unpunished.

I grieve for the women who have summoned the strength to tell their stories at great personal risk, but have been summarily dismissed as ‘troublemakers’.  Like Dr. Ford.  And their attackers have gone unpunished.

I grieve for the women whose rape kits are sitting in law enforcement labs gathering dust.

I grieve for the women who have been so damaged by sexual assault/rape that they could not function after their assault/rape.  Some have not been able to finish their education, hold down a job, have a healthy physical/emotional relationship with a partner and and and…

I grieve that the unaddressed, unacknowleded, unresolved pain becomes a generational pain.

I grieve for the women who felt they had not other choice to escape the pain but suicide.

I grieve for my cousin’s daughter who was raped at 16 by her 23 year cousin.  And who died in her sleep at 26 due to her alcoholism that started after her rape.

I grieve for my cousin who lost her precious daughter.

I grieve that I didn’t do more to support/help my college roommate when she told me her sister’s husband (her brother-in-law) came into her bedroom when she was visiting and sexually assaulted her.  I am so very, very sorry Joy…

I grieve that people entrusted with enforcing laws for the well being of their constituents just don’t care.

I grieve that the GOP is sending the message to young women through their refusal of an FBI investigation, that, for the sake of the entitlement of the rich and powerful, the claim of an assault on their bodies is of no consequence and not worthy of being taken seriously.

I grieve for a country that would appoint a possible sexual predator with a history of alcohol abuse who demonstrates vicious, unhinged and mentally unstable behavior to a lifetime appointment to the Supreme Court.

I grieve for the women who think that it’s no big deal for men to sexually assault/rape women saying “Boys will be boys.”

I grieve that more good men aren’t more involved in changing a culture that marginalizes women who have been sexually assaulted/raped.