The American Cemetery in Normandy

On this 75th anniversary of D-Day, I wanted to share some of the pictures from our visit to Normandy in 2014, shortly after the 70th anniversary.  Scores of WWII veterans who were part of Operation Overlord have passed away since then.  It’s highly doubtful that more than a handful of them will be with us to observe the 80th anniversary.

My visit to Normandy was one of the most moving experiences of my life.  I actually have tears in my eyes right now as I type this.  I struggle to comprehend the terror so many young men experienced that June morning 75 years ago.  And how many fathers, uncles, grandfathers never were because they fell as young men on a beach in France to defend the world against unspeakable evil.  And how many mothers and fathers never knew what happened to their sons because their bodies were never found.

The world is in danger of forgetting how evil like that still lives in the hearts of some.  Of repeating the same mistakes of rampant nationalism that led to the unspeakable suffering of millions.  Of not being vocal enough in denouncing all if the “-isms” that can lead to the dehumanization of “the other.”

Latest estimates indicate that 4,414 Allied soldiers were killed on June 6, 1944, 2000 of them being Americans killed on Omaha Beach.  There were a total of 10,000 casualties that day.  And that doesn’t include the deaths and casualties on the German side.

We can’t ever forget what happened 75 years ago.  And why it happened.  And do all we can to never, ever let anything even remotely like that ever happen again. 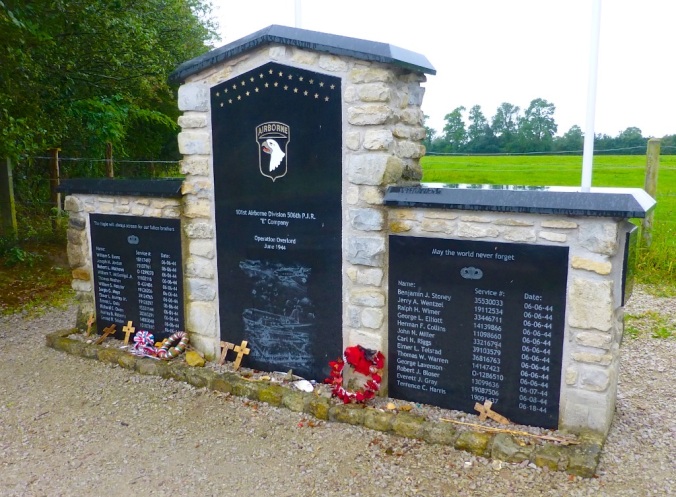 Memorial to the “The Bad of Brothers” Airborne unit.

Dick Winters was the leader of Easy Company. This statue was put up after his death because he would not permit anything honoring only him and not the rest of E Company in his lifetime. 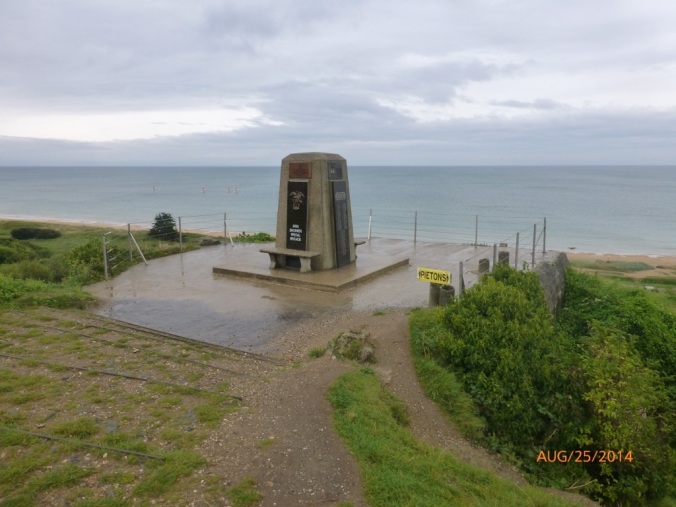 One of the hundreds of memorials in Normandy. This is at the top of Omaha Beach. 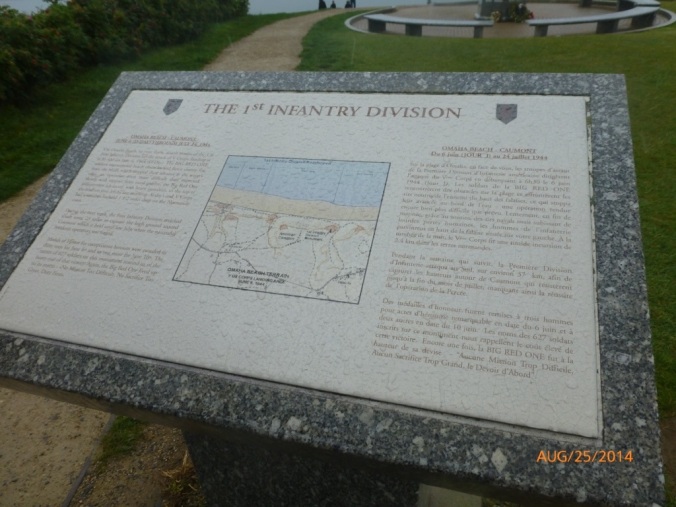 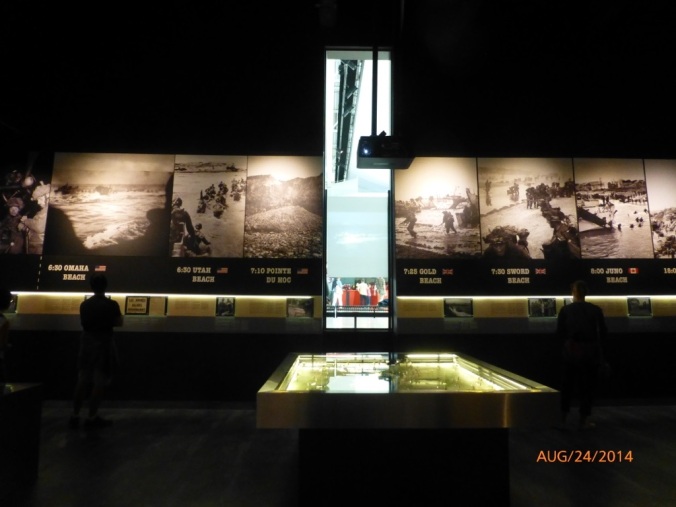 There are so many museums about D-Day around Normady. This is the one at Utah Beach. 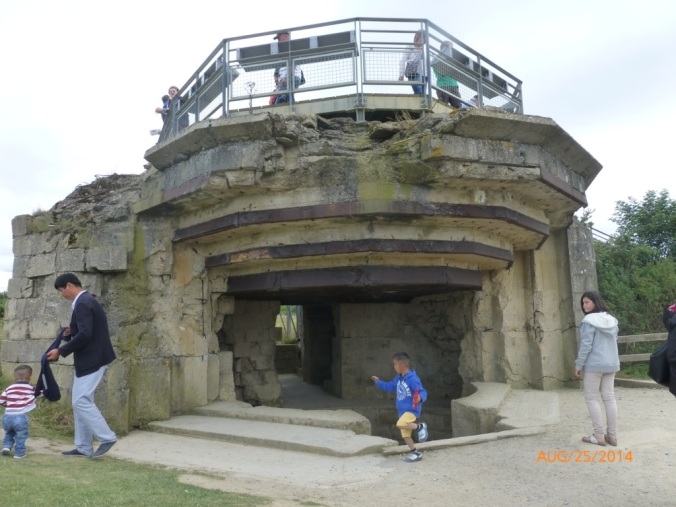 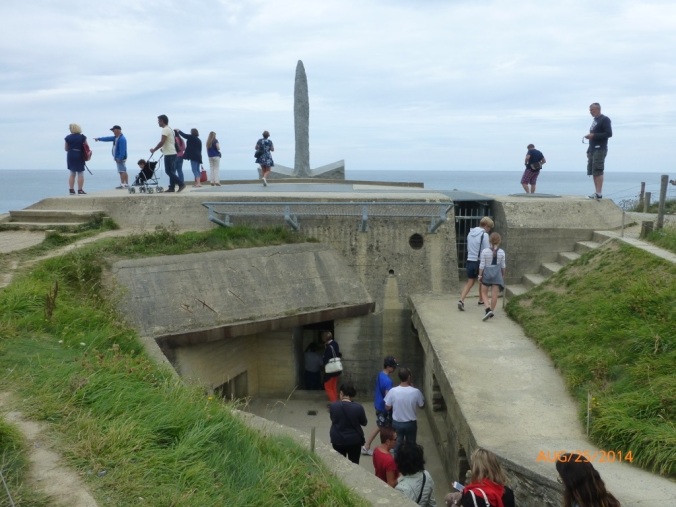 The ground is still pockmarked some 70 years later from heavy artillery fire.

The cliffs that the Army Rangers scaled on D-Day.

The tiny church at Angoville-au-Plain where two young American medics worked treating both Americans and Germans on D-Day. A fascinating story. One of the medics, Robert Wright was buried there when he passed away in 2013.

The 70 year old blood stains on the pews where the medics treated the wounded.

A stained glass window in the church honoring the two medics. 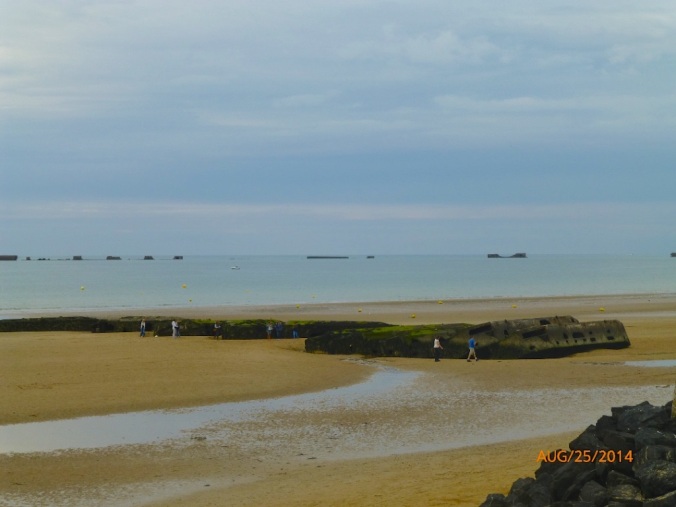 The remains of the artificial harbor the Allies built in Arromanches-les-Bains after D-Day to bring tanks, jeeps, munitions and other supplies to the troops. The story behind the building of this harbor is fascinating. 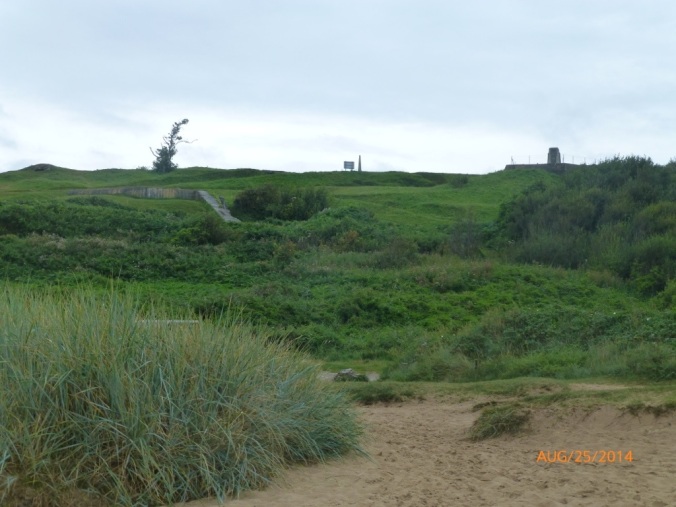 The hillside above Omaha Beach were the German gunners hid and picked off American soldiers in the first wave of landing craft.

The American Cemetery at Colleville-sur-Mer.

The American Cemetery contains the remains of 9,380 fallen American, most of whom lost their lives on D-Day and the ensuing operations in the following days and weeks.

In addition to the American Cemetery at Colleville-sur-Mer, there are also English cemeteries, Canadian cemeteries and German cemeteries that all hold the bodies of the young men killed as the result of a madman’s dream of racial purity and world domination. Such a horrific waste of young life.

God bless them all and may their spirits help us to never forget.

4 thoughts on “Never, ever”

© Aging Gracefully My Ass (AGMA), 2013-2023. Unauthorized use and/or duplication of this material without express and written permission from this site’s author and/or owner is strictly prohibited. Excerpts and links may be used, provided that full and clear credit is given to Aging Gracefully My Ass (AGMA) with appropriate and specific direction to the original content.