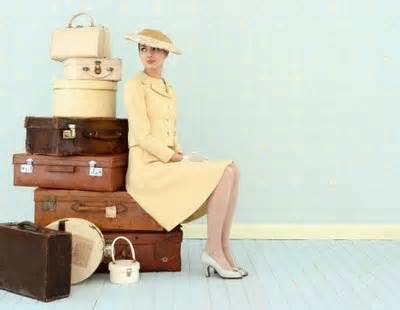 So last week I was waxing nostalgic about airports of yesteryear. I think we’ll stay with the air travel theme. It’ll be fun looking at the delights of flying in 2015.  Like getting the flu.

So buckle up, take a Tums and get the vomit bag out – it’s probably going to be a bumpy ride.

After a long (for AGMA) spell of staying put, I’m heading back to the friendly skies again. Or maybe we should call them the “ambivalent, but you still won’t get pretzels or reclining seats” skies.

One of the most nerve wracking challenges air travelers face today is “roller board roulette”.  It’s when you gamble that there might actually be overhead bin space and bring a carry-on bag.

You say the Rosary before you do online check-in and pray that, when you print off your boarding pass, the magic words “Zone 1” appear. Zone 2 is just too iffy…

Honestly, the last thing you want to hear on the plane is, “You’re going to need to gate check your bag.”  I get chills even thinking about it.

This is never an issue when I fly with my husband. He has a degenerative neurological condition that is affecting his legs. It causes him to walk very slowly with a cane, and leaves him able only go short distances before he poops out.

And getting to some gates at certain airports is like running a 5K. You need to stop a few times on the way to get nutrition, hydrate, take bathroom breaks and stretch. And oh, the stabbing pain if you’re loaded down with a heavy backpack and carry-on.

As a result, we always request wheelchair assistance to get him to and from our gates. This has been an adventure in and of itself.

Because of his mobility issue, we’re always the first to board no matter what zone is on our boarding pass. It’s us and the people flying with small, screaming children, their strollers and their car seats. So…we always have space for our roller boards no matter how full the flight is.

This has spoiled me. It’s easy to get used to not having to wrestle the person sitting across the aisle for space in an overhead bin.

But when I fly alone, reality slaps me in the face like a hung over Kardashian.

No priority boarding for AGMA. I’m with the masses, waiting and jockeying for position at the gate. It’s like being in no man’s land. Everybody is suspiciously eyeing everybody else and their carry-ons. Feigning disinterest, but with a desperate, hungry look in their eyes, some try to sneak a glance at the zone on your boarding pass. They are the “overhead bin space” hunters and your roller board is the hunted.

I flew to Washington, D.C. several weeks ago on Delta. Being one of their Skymiles members AND having their credit card, I think I’m a pretty hot stuff on Delta. Too bad Delta doesn’t agree.

I checked my luggage on this trip, but had a very bulky backpack. I really, really didn’t want to have to smoosh it under my seat and not have room for my feet.  Total First World non-problem, I realize.

But birds chirped, violin music played and rainbow ponies filled the air when I saw my boarding pass.  The coveted, much envied and much desired Zone 1.  Score!

At the gate, the teaming masses undulated. A surge of pity went through me.  And although I knew I wouldn’t have to do battle to get space for my backpack, I realized the carnage that was about to befall most of the non-Zone 1 people who brought carry-ons. My heart ached for them…

The people pressed forward toward the gate when the agent announced priority boarding for people needing extra time to board. I did the smug sideways glance knowing that my Zone 1 status would soon separate me from the amorphous blob of testy, tired travelers.

Then the gate agent announced boarding for First Class, Diamond Medallion and Delta One customers. 30 people boarded. Of course they were next, but certainly Zone 1 would after them. Right?

Skyteam Elite Plus, Silver Medallion and Priority Boarding Trip Extra customers were next. 20 more people. I started to sweat.

At this point there were fifteen of us left at the gate. The gate agent finally announced Zone 1.

By the time I got in the plane, the First Class customers had had their cocktails and snack, and were asleep with their pillow and blankies. And everybody in economy coach smirked as I made that long walk down the aisle with all the closed bins, with my fat backpack.  I averted my eyes as I crawled over a Silver Medallion customer and GOL Smiles Diamond member to get to my seat.

I managed to squish my backpack under the seat. Then ate my slice of humble pie.

Thank you sir, may I have another.

28 thoughts on “The wild blue yonder”

© Aging Gracefully My Ass (AGMA), 2013-2022. Unauthorized use and/or duplication of this material without express and written permission from this site’s author and/or owner is strictly prohibited. Excerpts and links may be used, provided that full and clear credit is given to Aging Gracefully My Ass (AGMA) with appropriate and specific direction to the original content.